Any experienced FDM user will notice this. 3D printers sometimes fail, especially when using high performance materials. What could you do to prevent this to happen?

[bctt tweet=”Having someone open a door  can cause the warping that you are trying to prevent..(1)” username=”box3dprinting”]

Warping is caused by the cooling of the 3D printing material after it is deposed from the nozzle. Cooling the material will make it shrink. This shrinking process is depended on the environment temperature. The cooler the environment, the higher the shrinkage. The cooling is done by the surrounding air. This means that most of the cooling is on the outside of the object and that causes problems. The outer surface is shrinking faster than the inside and the object will start to deform. Deformation due to shrinking on the base of the object is called warping (fig1). Deformation in higher layers is called cracking, because the stress in-between two layers will separate these layers which will leave a crack in the object 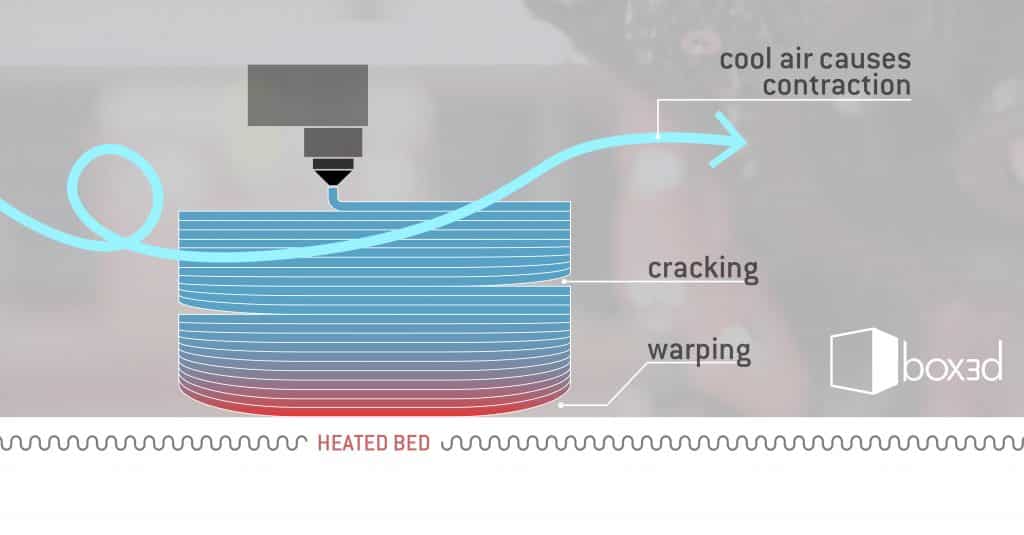 Generally material cost for FDM 3D printing are not significant. Most of the resources will go to the purchase of the 3D printer and to the labour that is needed to keep te it up and running. Lets give an example. You are running a FDM machine and you have a major print failure once in the two weeks so 20 failures a year. If solving the problem takes on average one hour than this would lead to 20 hours of labour. At a wage of 30 Euro per hour this would already cost you 600 Euro a year. Additional costs of delays or even loss of client are not encountered yet.

So the uptime of your 3d printer in influenced by warping and cracking. What could you do about it? Warping can be solved by modifying the object. Rounding the corners will help. Other things that could help are: check your bed levelling, increase build plate adhesion by cleaning it and/or using adhesive tools like 3Dlac, Buildtak or Pritt stick. A raft would help to increase buildplate adhesion, but that is not always suitable. Finally a heated build environment will reduce the material shrinkage.

[bctt tweet=”Because of  the stable print environment the printed material will cool down slower and the temperature is more equal throughout the print. This leads to lower shrinkage and a decreased chance of warping and delamination. (2)” username=”box3dprinting”] 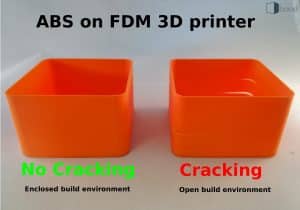 This one is more difficult to tackle. Using the right nozzle temperature for the specific material will increase the internal layer bonding which will reduce the change on cracking. Also shifting the moment of shrinkage to a point were the object has more shape helps. The more completed object is more resistant to the stress that is introduces by the shrinking. Delay the moment of shrinking can be done by a controlled build environment. This can for example be a stable environment of 40 degrees Celsius which is lowered to room temperature when the object has its full shape and strength.

1. Ed Tyson: 3D Prints Warping? Why It Happens and How to Prevent It
2. Ultimaker B.V., Installing the Advanced 3D Printing Kit for the Ultimaker 2+ 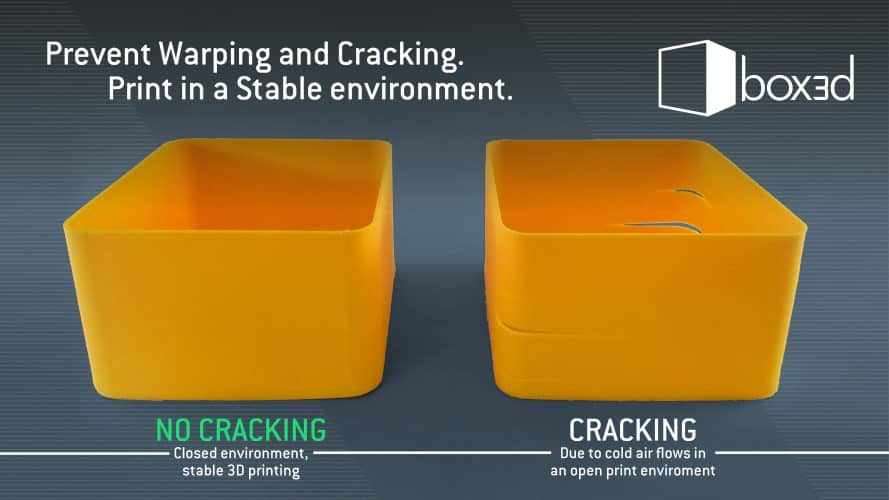